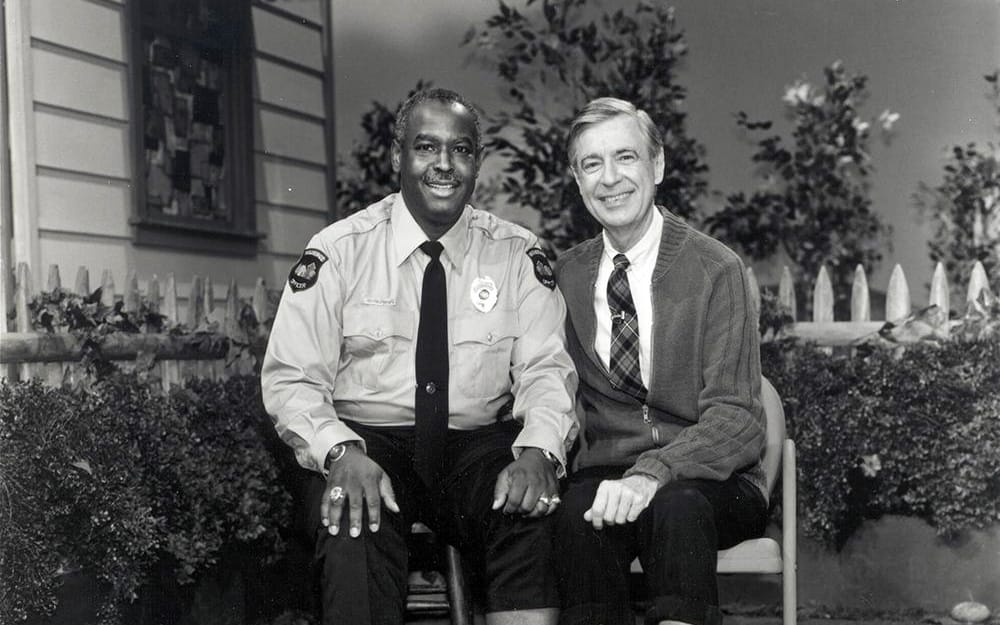 It’s no surprise that when a Presbyterian minister wanted to heal the divide between blacks and whites, to show us how to serve each other, it looked very much like Jesus’ own servanthood. When Rogers asked Clemmons to become a police officer, he asked him to become the enemy in order to redeem the enemy—just as Jesus took on the form of his enemy to redeem us. And when Rogers shared his pool and wiped his friend’s feet with a towel, he was repenting through servanthood—the same servanthood that motivated Jesus to take up the towel the night before his death.

But both acts required humility. Both acts required relinquishing privilege—the privilege of anger on Clemmons’ part and the privilege of comfort on Rogers’ part. And through this humility, both men embody Christ: neither condescending to the other; both simply surrendering to the other. So that in the very same act, the humiliated are brought up and the proud are brought down.

In one brief scene on a children’s television show, we see this happen. We see two men humbling themselves. We see two men cleansing each other through acts of communion and identification. We see two men showing the world how reconciliation happens. And we hear Mr. Rogers say, in his own quiet voice, “Sometimes just a minute like this will really make a difference.”

END_OF_DOCUMENT_TOKEN_TO_BE_REPLACED

Most of us unconsciously believe that God speaks only to those who are mature and pure. The trouble is, positive self-talk forms barriers to hearing God: he loves the broken-hearted.

The God of Scripture is attracted to the humble, and it is the humble he loves to raise up. That’s why Jesus invites the broken-hearted: “Come to me all who are weak and heavy-burdened.”

END_OF_DOCUMENT_TOKEN_TO_BE_REPLACED

David and Caesar wanted to get something—money, fame, new territory, self-esteem. Then Jesus came and showed us what a real leader should look like. He didn’t come to get anything at all. On the contrary. Under the auspices of Caesar’s demonstration of pride, the Christ was born in the humblest of circumstances.

But Jesus’ methods don’t apply just to leaders. He showed what it means to be a human: to live sacrificially, to give and not to receive despite the flesh’s desire for edification.

END_OF_DOCUMENT_TOKEN_TO_BE_REPLACED

No more pages to load